Some while back, I had a fuel sending unit on my K100 fail on me.  It would not register the volume at all.  I had a chance to look at the failing fuel level sender and discovered information that would be useful for the community.

How does the fuel sender work:
The sender has a movable arm ending in a float that raises and lowers according to the fuel level.  The arm articulates a pair of metal wipers over two circuit cards.  The assembly is housed in a metal box welded to a bracket that mounts to the bottom of the tank.  The wiring goes through a liquid-tight connector assembly. 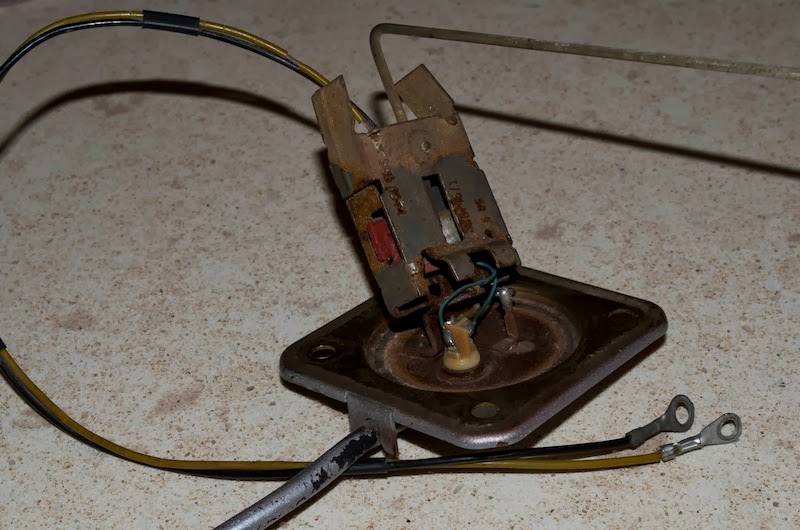 Fuel Level Sensing:
The float assembly arm has two electrical wipers attached to it.  The upper wiper sweeps across a 130 ohm wire wound resistor plate, one end of which is connected to the liquid-tight connector and the other end is not connected to anything. The upper wiper outputs a variable resistance value between 2 and 130 ohms, proportional to the position of the wiper.

NOTE The fuel sender works in reverse to most modern motorcycle fuel senders, making it incompatible with many aftermarket gauges. This behaviour can be changed and will be described in a section below

How to Test the Fuel Level Sensing:
To test the resistive wire, use a multimeter with resistance measuring capability.  As in the photo set below, when measuring between the connector and the left side of the resistor, the value should be around 130 ohms. 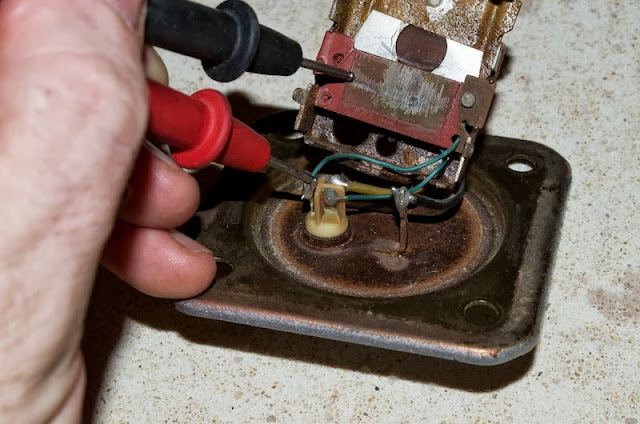 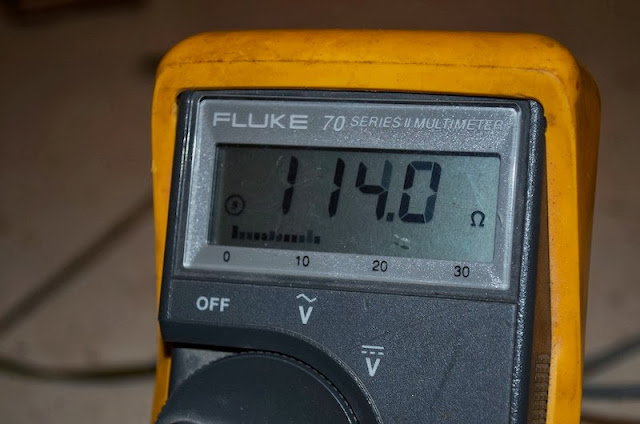 When measuring between the connector and right side of the resistor, the value should be around 2 ohms. 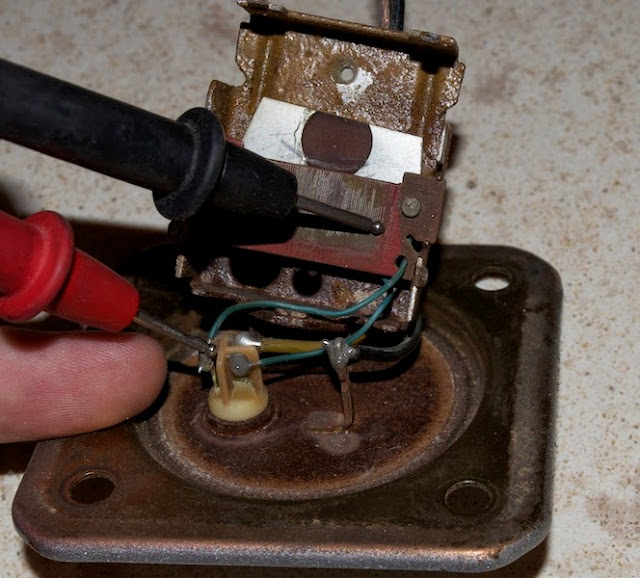 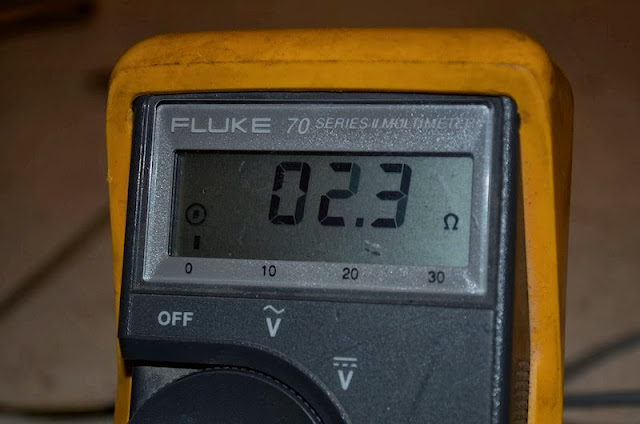 How to Recondition a Failing Sender:
The sender tends to fail because years of accumulated corrosion prevents electrical conductivity. The symptom of corrosion will be erratic resistance readings from the upper wiper and, most obviously, the fuel gauge will not register anything on its display.  In the photo below, note the thick brown corrosion on the pivot hole and green corrosion on the float arm pivot.  All this corrosion prevents an accurate resistance measure being sent to the fuel gauge. To recondition a failing sender, it is necessary to open the metal box and clean the contacts.

There are four tabs that hold the case closed.  Carefully bend the tabs straight and the top will separate.  Be careful because there is a spring under the wiper arm and it may fly off. 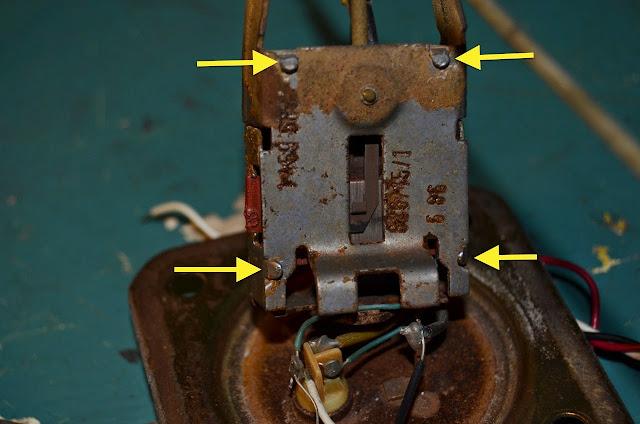 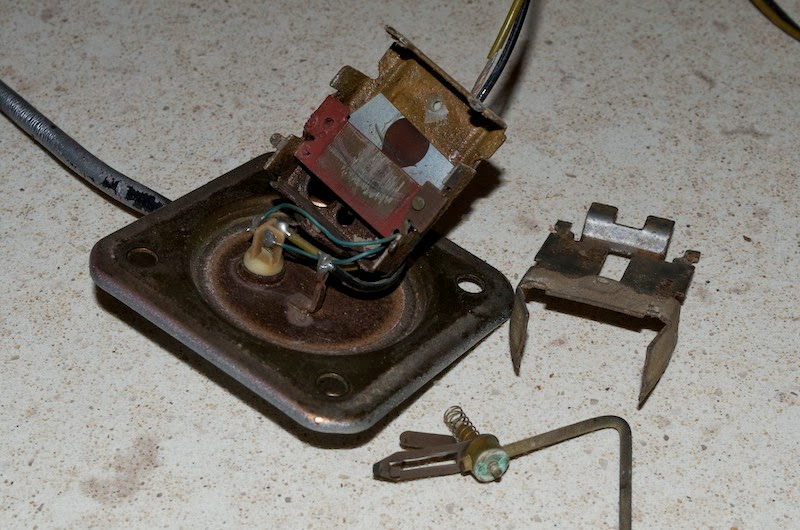 Remove the wiper arm and check that the contact pads look clean and shiny. 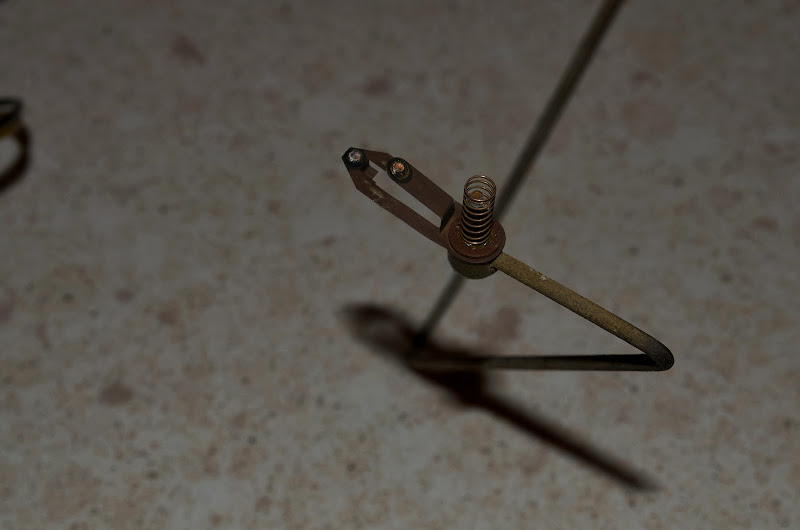 Depending on the age of the sender and other factors, it may take no more than some Deoxit cleaner and a cotton swab to clean the corrosion from the wires.  I would try this first.  If the Deoxit doesn't get rid of the accumulated corrosion, resort to a mildly abrasive paper.  Using a small piece of 1200 grit wet and dry sandpaper, carefully clean the resistive wires of accumulated corrosion.  The technique is to fold a tiny piece in half so that is has some stiffness and careful drag it across the wires IN THE SAME DIRECTION AS THE WIRES ARE WOUND.  I use emphasis because you don't want to drag the abrasive paper across the wires as it may break them.  Don't use any more pressure than is offered by the stiffness of the sandpaper, such as pressing with your finger.  The wire used is very brittle and can easily break.

Using the same 1200 grit wet and dry, clean in and around both pivot holes as well as the float arm pivots.  It is important to clean all corrosion from the pivots as from the hub where the wiper blades are fixed.  The spring is there to act as a conductor, to allow electricity to flow through the wipers, through the spring, through the pivots to ground.  This is the critical area where corrosion buildup will break the sender.  Once all corrosion is removed, reassemble the parts. 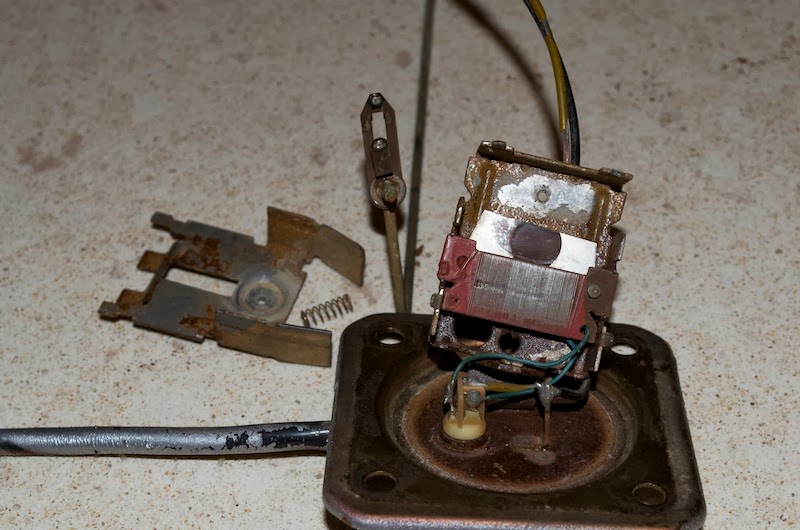 Test whether the cleaning is successful by measuring the resistance over the entire sweep of the float arm.  The ohm meter should read consistent increasing resistance as the arm moves from full limit to empty limit.

Reserve level Sensing:
The lower wiper on the float assembly arm sweeps across another plate containing two circular contacts, one of which is wired to the liquid-tight connector, the other is not connected at all.  The lower wiper outputs a binary signal -- open circuit or grounded -- that communicates the reserve volume to the low fuel light on the instrument cluster. 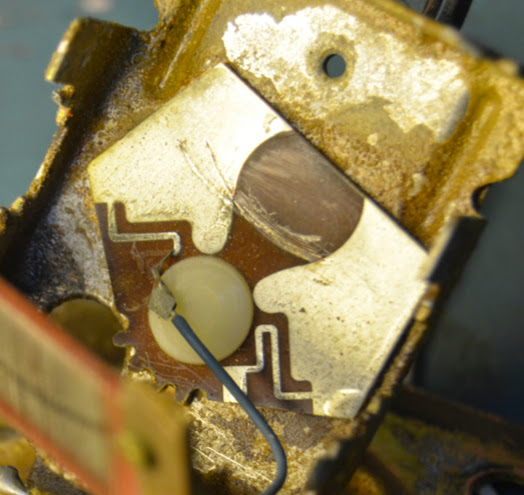 Normally, when the tank is full of fuel, the circuit is open.  When the arm reaches a certain position, the wiper contacts the conductor and the output gets grounded.  This signals when the float reached the reserve position and the instrument light should illuminate.

Testing the Fuel Reserve:
To test, , use a multimeter with resistance measuring capability.  As in the photo set below, there should be conductivity between the connector and the left side plate. 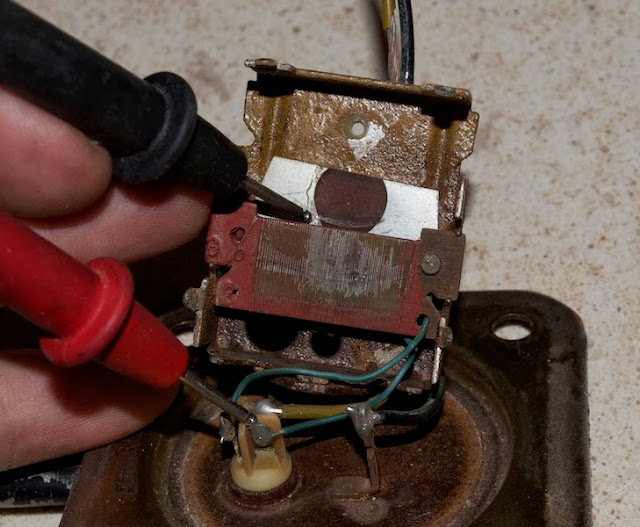 There should be no conductivity between that same conductor and the right side plate. 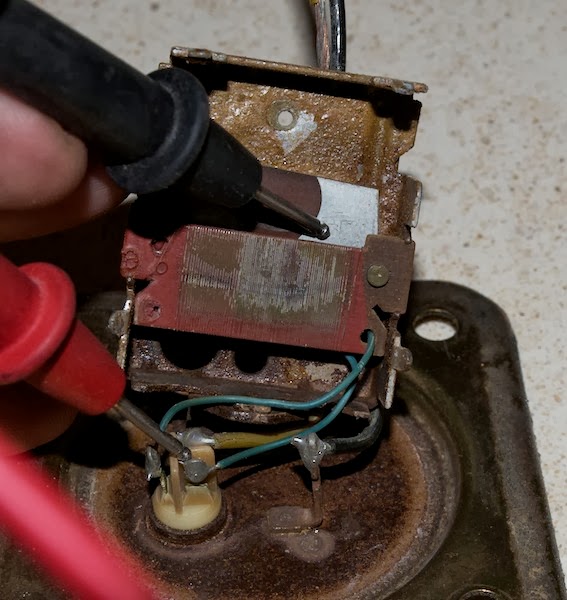 How to Adjust the Reserve Level
Many people would think that one would have to bend the float assembly arm to adjust the level of fuel where the reserve light illuminates.  Not so with the BMW fuel sender.  It has a built-in adjustment.  The point where the low fuel light illuminates is dependent on the point during the rotation of the lower wiper when it encounters  the contact plate.  There is an adjustment on the sender which can determine when the lower wiper contacts the plate. 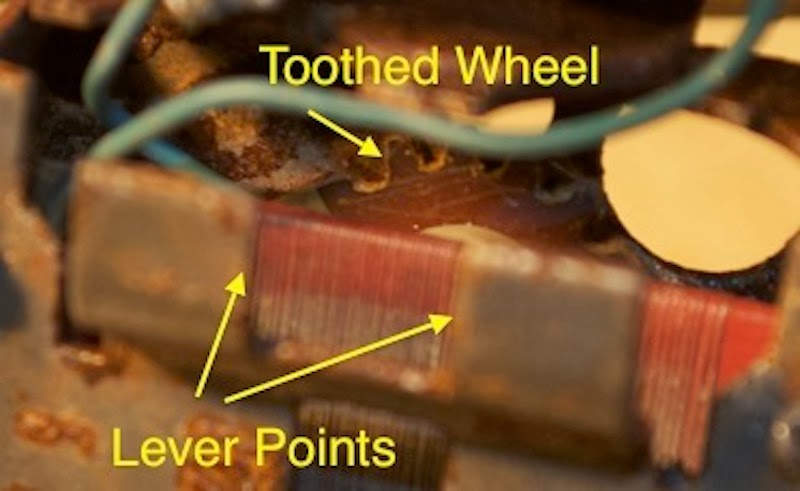 In the photo above, you can see a toothed wheel.  This wheel rotates on a nylon pivot, causing the bottom plate to be rotated and the contact to change position.  Using a small screwdriver, get a purchase on either of the indicated lever points and engage the tip of the screwdriver's blade with one of the teeth of the wheel.  Rotate the wheel with a levering action.

How to Modify the Fuel Sender to Make it Compatible with Modern Gauges
As mentioned earlier, the fuel sender is incompatible with modern gauges and aftermarket instrument clusters, like the Koso, Dakota Digital and Acewell.  It is a simple job to modify the BMW fuel sender to make it fully compatible.

Disassemble the case by carefully straightening the four tabs that hold the top with pliers until the top plate is released.

Remove the top plate, float assembly arm and tension spring.  Be careful not to loose the spring nor damage the wipers on the float arm.  The resistor board will be revealed. 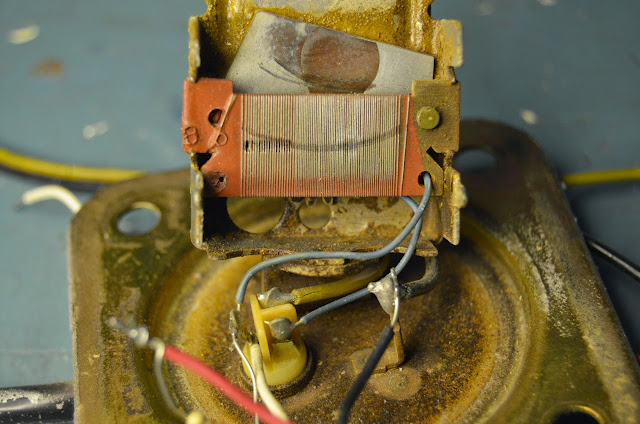 Locate the small tabs that secure the card to the frame.  These need to be moved out of the way to release the board from the frame.  I found that a set of slip-joint pliers works best because they exert strong pressure and will not slip.  The tabs are very stiff so be careful not to bend them too far nor break them.  It will only be necessary to bend the top two tabs a small amount to release their grip on the resistor board. 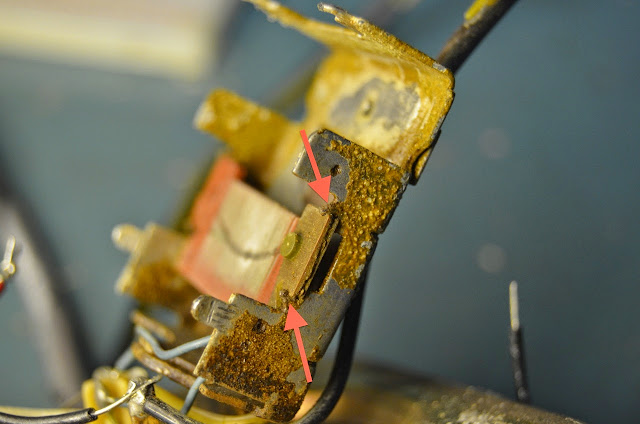 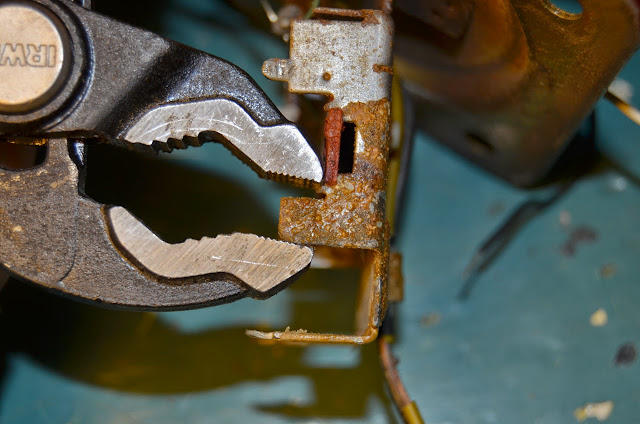 Once the board is freed from the frame, carefully remove it and flip it 180° so that the obverse side is now facing up.  Reinsert it back into the frame and close the tabs to secure the board.  Try to handle the board by its edges so as not to touch the resistive wires.  The board only goes in one way so it's not possible to incorrectly orient the board. 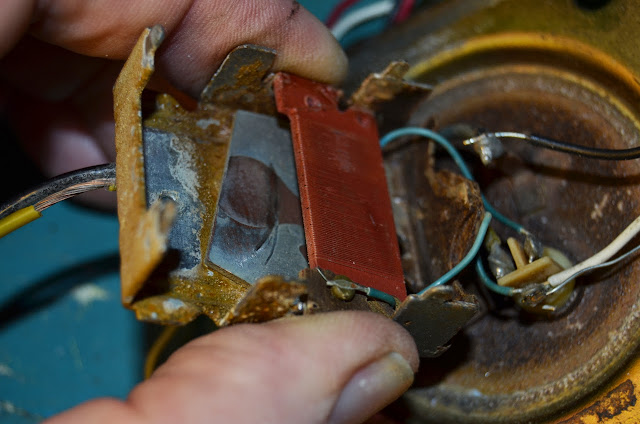 I found that using a small drift and hammer worked very well for closing the metal tabs.  You'll want the board to be fully seated in the frame. 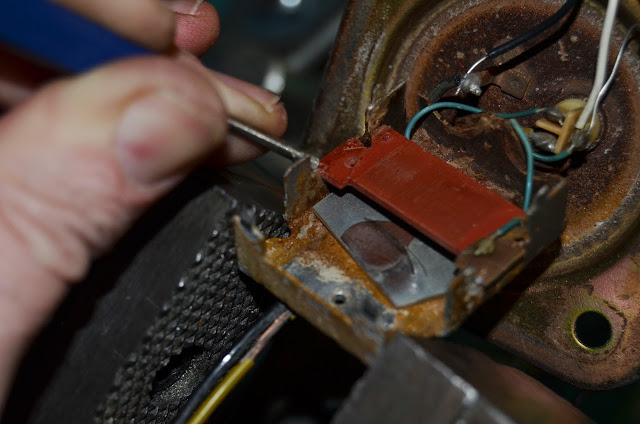 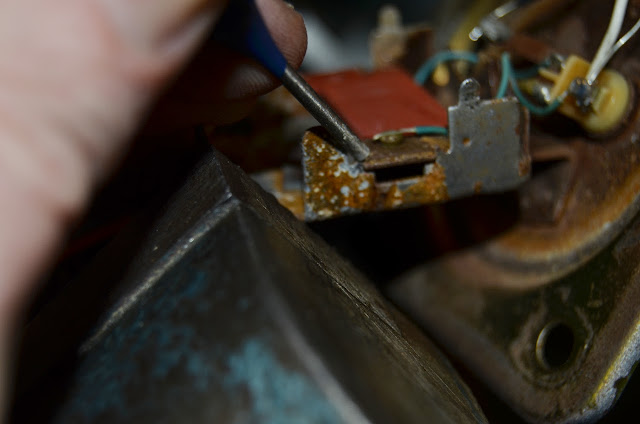 Before reassembling the frame, it is necessary to remove the enamel coating from the resistive wires.  Be very careful with this operation so as not to destroy the brittle wires.  Using a piece of 600 grit Wet-n-Dry, lightly sand the wires ONLY in the direction they are wound. If possible use a multimeter set on resistance mode to test that the coating is fully removed and there is conductivity.  If you skip this step or do not remove all the coating, the fuel gauge will not work. 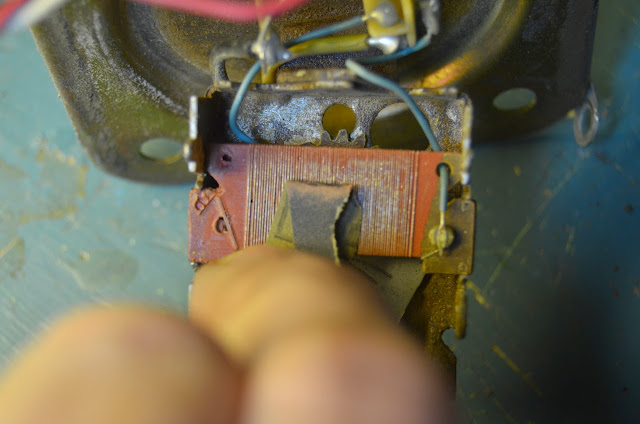 It's also a good time to clean up any corrosion on the wiper tips and pivot. 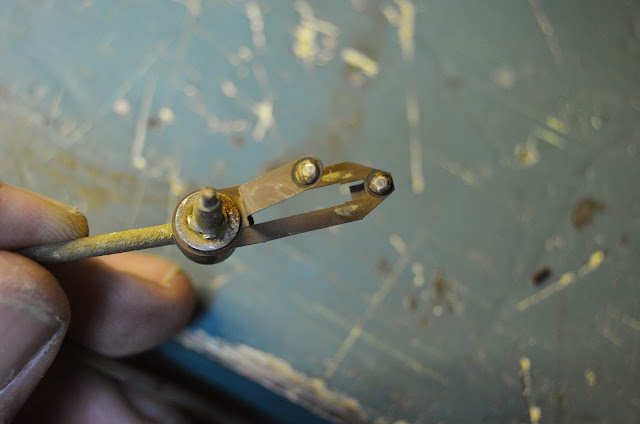 Reassemble the sender by reinserting the float assembly arm, spring and top plate.  Form back the tabs that secure the top using slip-joint pliers. 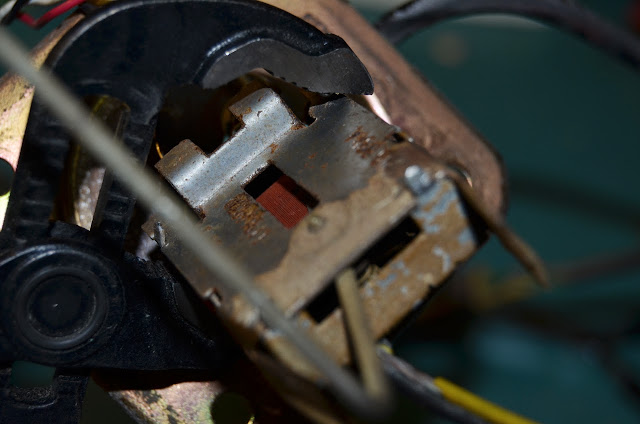 Once this operation is complete, electrically test the sender.  Use a multimeter set on a range that can measure resistance between 1 Ohm and 200 Ohms.  Place one probe on the frame and the other on the white wire.  When you move the float assembly arm, the resistance should change between these values.  You will find that the resistance will now be about 2 Ohms with no fuel and about 130 Ohms with a full tank.  This range is directly compatible with modern Japanese and European gauges.  You might need to program the gauge to understand the sender's range.